Last updated by Sadia at .

I was lucky enough to spend a week in Fes, Morocco in September. During my week of Moroccan adventures, there was of course much tea drinking to my delight. The Moroccan’s are heavy tea drinkers, in fact the locals jokingly told me they call it ‘Moroccan whiskey’!

One of the international tea parties that we offer is the ‘North African Tea Party’ and this tea party serves traditional ‘Maghrebi’ mint tea as drunk in the ‘Maghreb’, this defines the region of Northwest Africa made up of the following countries; Morocco, Tunisia, Algeria, Libya and Mauritania. The ‘Maghrebi’ tea culture has spread throughout North Africa including Egypt and Sudan and southern Spain. Tea we found occupies a very important place in Moroccan culture and is considered an art form.

Drinking Maghrebi – style mint tea in the hot climates was lush, a thirst quencher and very refreshing. It is green tea (gunpowder tea) served with mint leaves and copious amounts of sugar! Served not only a meal times but throughout the day, it is a drink of hospitality, impolite to refuse. 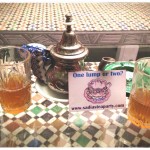 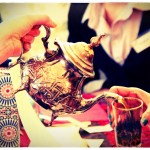 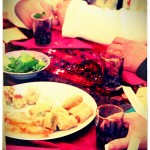 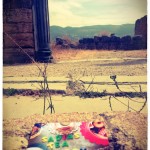 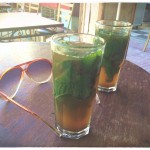 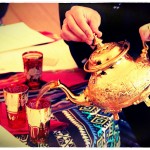 Interestingly enough, tea is not native to Morocco. It came over after the Crimean War; British merchants were in search of new markets in which to sell their tea. The Moroccans took greatly to this new drink, adapting and making it their own. The medicinal qualities of mint were enjoyed by folk in this region and grown in abundance; fittingly they added sprigs of fresh mint to the tea to create what we now know as ‘Maghrebi’ mint tea.  Today the main provider of tea to the Maghreb is China.

Whilst out in Morocco, my favourite cup of tea was in Bhalil, with a little lady called Mama Aisha and our tour guide for the day, Hassan. Walking through Bhalil involved quite a climb up roughly paved streets. Bhalil is famous for its cave houses, apparently 40 of these are still inhabited, and a few are routinely open to tourists. In one of them we had Maghrebi style mint tea with Mama Aisha, a strong, sprightly lady in her eighties, whose family had resided in this home for the past 3 centuries. 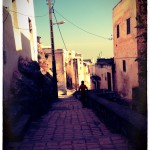 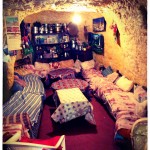 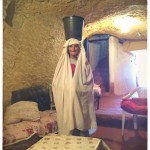 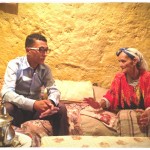 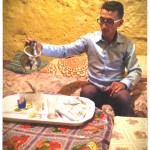 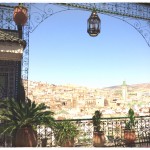 The customary green tea used is a gunpowder tea imported from China, I brought some back from Fes however it is widely available in England. Here is how you can make a pot of tea the Maghrebi way.

There you have it folks, enjoy! And please do come back next month when we feature another tea from a different part of the world.